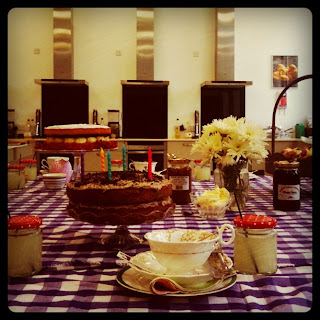 Yesterday saw The Secluded Tea Party taking place Live on BBC Radio Cambridgeshire with the lovely and ever so slightly eccentric Glenn, one of the producers of the shows at this local station.
We had been expecting the lovely Sophie, however due to illness, Glenn had to step in and save the day by joining myself and my fabulous Tea Party guests for a delicate cup of tea and a slice of home made cake.
Such a hard job, but somebody had to do it ; ) 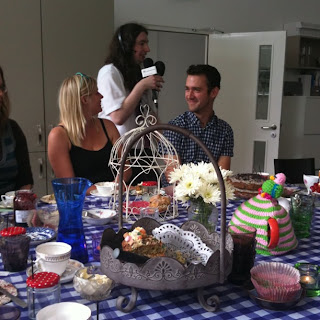 This version of the Tea Party was in fact hosted at one of my favourite Cambridge city locations, The Cambridge Cookery School, which is secluded within beautifully landscaped grounds to make it work perfectly for a secret mid-morning tea party with plenty of cake and tea and of course great conversation with new friends.
My guests were a mix of returning tea party fans who have been to previous versions of The Secluded Tea Party and who have enjoyed my secret afternoon tea locations across Cambridge and the Cambridgeshire Countryside.
We also had some brand new Tea Party guests joining us for their very first time, and very nice it was to have them join us too. 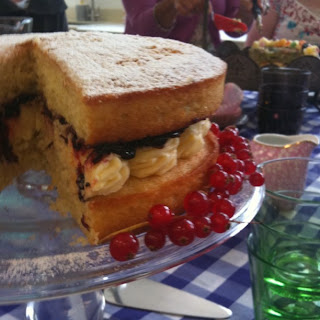 In fact, one guest had brought along some of her friends for a girly catch up over the afternoon tea party table, and I knew that I had met one of her friends before as soon as they walked through the door.
It had taken me a while to figure it out, but we both realised that we had met through a mutual friend 12 years earlier at our Sixth Form College.... Wow... What a small world!
And it was fantastic to catch up and find out what we had all been doing since those college days, with the talk of Tea Parties, the beautiful & local town of Saffron Walden, Montessori Schools and Hippy Communes... as you do hehe. 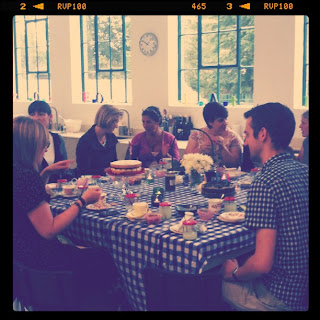 The menu consisted of Cinnamon Breakfast Rolls made by Tine at the Cookery School as well as my freshly baked Fruit & Spice Scones (of which I was still cutting out and preparing when my guests started to arrive, but I was pleased that they could see just how fresh my scones are made for my events!) and they were served straight from the oven to the table to enjoy with some locally made preserves from my favourite jam lady in Cambridgeshire.
I had also conjured up 3 layer cakes including a deep Victoria Sponge with Blackcurrant Jam, a Cookies & Cream Oreo Cake and the favourite *Tuck Shop* inspired layer cake with Sherbet Buttercream, of which I had dreamt up a few days earlier for the Clandestine Cake Club meet in Cambourne.
I even got to use my brand new Cath Kidston Tea Cosy from their Cambridge shop, which was a focal point and discussion topic whilst chatting to Glenn hehe. I love this and would love more tea cosies added to the collection as the months move on. 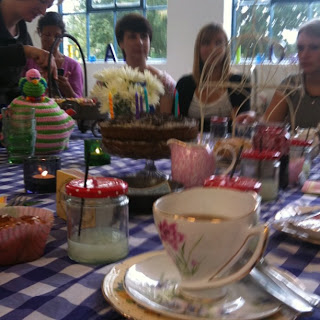 One of my guests also had a birthday coming up, of which I had learnt whilst facebooking the previous evening, so I decided to surprise her and put candles in one of the cakes and of course allow my 14 other guests to sing to her and just embarrass her slightly as we Brits like to do hehe.
We were not allowed to sing the song live on air, as after asking my lovely waffling BBC Radio friend (Glenn, who at this point was running around the room chatting to my guests in between slurping my home-made lemonade in pretty polka dot jam jars and digging into mouthfuls of my cake in between conversations with the on-air Radio Presenter - We think hehe...), he told us that if we did, Disney would be knocking on the door to charge us!... I had NO idea that they owned the rights to that song haha... so we sang off air to be safe, but it still got a mention on the wireless later on : ) 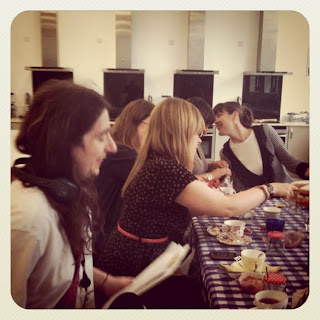 It was just hilarious and random and we all loved every minute of it!
And as you may have heard, we were 99% female at today's table, with one lucky man enjoying the cake and ladies... his two favourite things in life, he said it himself... live on air ; )
Robert, you are a fab guest every time hehe... And I think Glenn was slightly jealous of your place at the table, I mean, what man wouldn't be with all those lovely ladies surrounding him!?
A big thank you to my guests for being such great sports and for taking the left over cake away with them once they were all full to the rafters but willing to eat more later for their dinner (I love hardcore cake Lovers), and to Heather & Vanessa at Radio Cambridgeshire for arranging this fun-filled morning at our Secluded Tea Party, and a huge thanks to Liz Rhodes for mentioning our spot on her Afternoon Chat show the very next day (Twitter friends had made me aware whilst I was busy working away, you have got to LOVE Twitter for these sort of updates!) 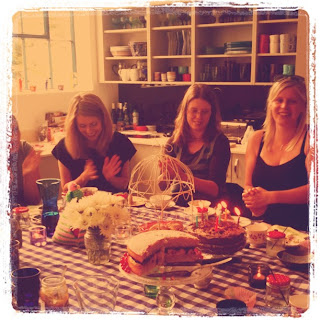 I am starting to enjoy becoming a regular on the Radio (That's 2 wireless appearances now : ) ... Bring on the next Radio-inspired adventure.... should there be one out there to enjoy in the future!
Perhaps next time Glenn can come and join us for a fairy tea party and be given the chance to wear his fairy wings that he so badly wants to show everyone.
Hmmmm... I'm tempted!
And if you missed it, you can listen again for the rest of this week HERE.
And I suggest you do as it's so silly it will put a smile on your face hehe.
(You will find it starts around 1 Hour 30 minutes into the show, and we had 3 or 4 live slots after this : ) 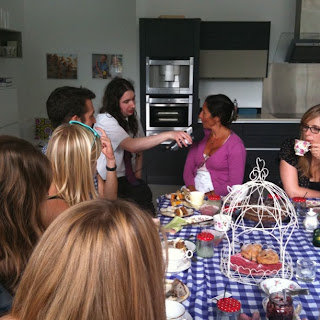