The Art of Afternoon Tea Etiquette 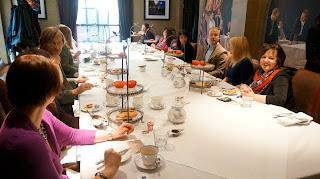 Having recently taken a new position during the week where I look after two very refined young boys and prepare home cooked meals for them, I had suddenly realised how quickly good manners can go out of the window, even though they had been taught them many years ago.
It's taken a few weeks to remind them of what good manners are at the dinner table and this is a new interest that has been sparked in me, especially when it comes to our younger generation not realising just how rude they are becoming chewing with their mouthful, talking about disgusting topics between mouthfuls and not asking to leave the table or even thanking me for their meal. They have Miss Sue Flay to answer to now... haha and they can thank William Hanson for this and his sheer passion for modern and traditional manners combined. 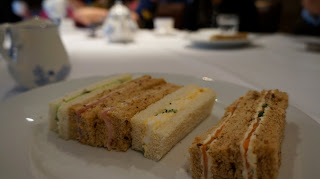 After the success of our very first "Afternoon Tea Etiquette" event last September mixed with our recent "How To Dine LIke Downton" event in March, this weekend saw the return of our Afternoon Tea Etiquette workshop in Cambridge, hosted at the fabulous Hotel Du Vin on Trumpington Street, where we greeted 16 guests to our table to enjoy a few afternoon tea treats whilst we taught them about traditional British etiquette at the table.

Having just returned from China, William was full of new cultural differences between us Brits and the Chinese tables, which amused us and educated in equal measures.
We also discussed why poor Lady Edith never got to wear a Tiara in "Downton Abbey" after 6pm and may well never do so, it really does tend to bring our the conversation on such important conversational topics at these events, it's fantastic. 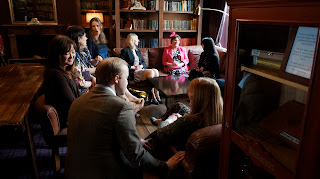 We hosted the "Ultimate Afternoon Tea Finishing School" for the ladies and gents seated around our grand table and for 2 hours they hung on every word, often interjecting with their own welcome tales and tips, it was a tremendous amount of fun and we laughed... a lot!

With William having just flown back from China and myself having just gotten over a virus, we had both arrived on empty stomachs this time, unlike the first event of which we had lunch beforehand and limited our afternoon tea intake... we learnt our lesson and managed to sit and enjoy everything on offer this weekend.
We had delicate finger sandwiches to start, with a selection of fillings including egg & cress, cucumber, salmon and ham. Traditionally, there would only be one filling per sandwich, so this worked perfectly to showcase this. Traditional finger sandwich fillings could also include Coronation Chicken, of which was very popular for the Jubilee. 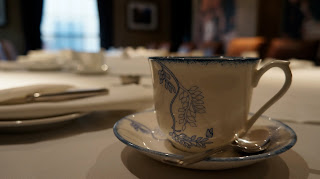 Loose leaf tea was served, with a choice of Chinese Rose Petal, my personal favourite, as well as an English Breakfast and the "Royal Blend" which most people opted for.
What we had on offer for this event would have been "High Tea", usually hosted at a high table with your saucer left on the table when drinking your tea.
If it had been "Low Tea" you would have been seated at a coffee table, holding your saucer at chest height whilst drinking your tea from fine bone china upstairs in the home. 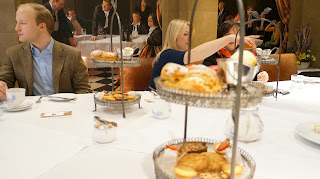 As well as being taught how to take their napkin in hand (and the many sizes of napkin there actually would have been, a mine field in itself!) and place on their laps as well as how to converse with the guests to the left and right of you, how to network politely, where to put your wrists and elbows when not eating and not to stick one's pinky out whilst drinking your tea, our guests were also taught how to stir the sugar in a polite manner when stirring their tea.
Stirring in a circular motion is not the done thing, as it can make a noise, but also causes a "whirlpool" motion which keeps the sugar cube towards the bottom of the teacup, but you should stir in a 6-12 clock motion (up and down) without clinking the sides to coat the sugar cube and help it dissolve quickly.
Let the teaspoon drip and then place behind your cup onto your saucer... who knew there was so much to learn just in asking for sugar in your tea - phew! 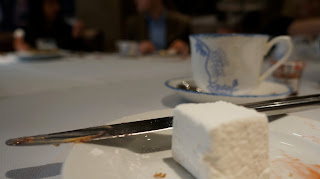 We also had a short history lesson in the very first tearoom to be opened in the UK, of which most believe to be Lyons, but is not in fact true.
The first tea room to be opened was actually the "A.B.C." (Aërated Bread Company), opened by Dr. John Dauglish in 1864 in the courtyard of Fenchurch Street Railway Station in London. Joseph Lyons didn't in fact open his first tea shop until 1894.
These sort of establishments (as well as afternoon tea in ladies own homes) meant that a young woman could actually visit somewhere unchaperoned for the first time and meet with her friends, maintaining some independence in her life - this afternoon tea tradition is still going strong today as we all well know, although men now will partake more readily! 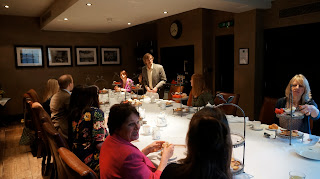 Whilst eating our freshly baked scones, William showed guests how to break them apart politely and we had the good old "Jam/Cream first" debate and had a lovely lady at the table who actually came from Cornwall, but enjoyed the Devonshire way, very controversial indeed!
The cakes at this afternoon tea tier included homemade marshmallows (which caused quite the conversation on how to eat these beautiful creations - a game of "fluffy bunnies" not allowed ; ) as well as mini custard tarts, strawberry & cream tartlets, a fortified fruit cake, cupcakes and even homemade cookies (dunking not permitted!) so we were very lucky indeed. 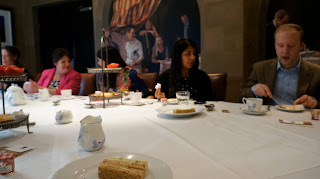 Once you have finished eating, you should be placing your cutlery at the 6-12 position on your plate to help the waiting staff know when you are finished, this is the polite thing to do for this reason alone. However, in the US, William did note that they traditionally place cutlery at the 10-4 position so as not to knock your knife & fork, which also makes good sense, so this would also be acceptable.

The main thing to remember about etiquette is that you are there to make your fellow diners or guests feel good about themselves, it would be rude to pick up on their own bad manners or etiquette faux pas, so it's truly common sense for the most part.
If you are unsure on how to do something at the table, if in any doubt at all, do as your host or hostess does and mimic their behaviour and mannerisms, this is fine to do. 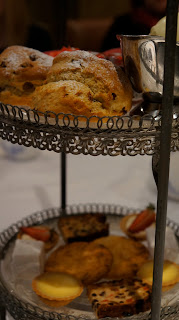 William and I had a fabulous afternoon and very much enjoyed getting to know our fellow guests whilst treating them to a very relaxed afternoon of treats and tips, we truly hope that they enjoyed it as much as we did, these events always seem to fly by so quickly, we could have stayed and chatted for hours afterwards too. 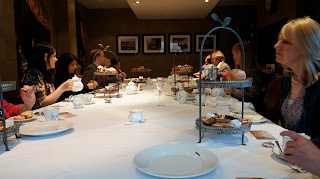 We had also started off our event being greeted by a bride and her bridal party in the Library, where she was getting ready and having some pre-wedding shots in this stunning room, much to our delight and distraction ourselves, I think we both also helped to distract her from her own bags of nerves, bless her. William even helped her father with some father of the bride etiquette much to his delight, which made this ever so slightly different to our last event hehe! She looked stunning and if they are now reading this, we hope it all went to plan and your gorgeous dress didn't get too dog eared in the garden at Trinity Hall. 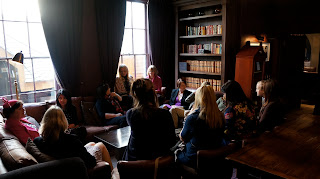 William and I are currently looking to visit another City further north of the UK for our next etiquette ideas, so watch this space for news, of which we should be able to announce very soon.

We also had a fabulous treat after reading an article in the Financial Times this weekend, thanks to Tim Hayward, who came along to our "Dine Like Downton" event as part of Eat: Cambridge festival a few weeks back, what a write up it is too!
You can read this HERE. 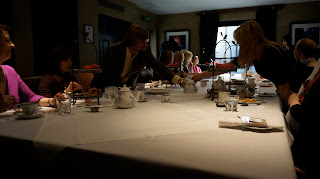 
See what the lovely Deepa aka "The Lazy Giraffe" had to say about our event: HERE

Posted by The Secluded Tea Party at 06:25