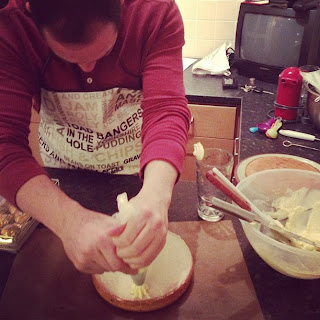 As some of you know by now, I am now offering up my Afternoon Tea Baking expertise in the form of my new Baking School.. in your OWN home.
You can read more about the plans for this here, along with my plans to get this
spot on, I have recruited a few impartial Secluded Tea Party friends to allow me to use
them as *Test Students* to iron out all the creases before I release myself into your very own home!

I plan to be your very own "Fairy Cake Mother" - Resting by your side with a cuppa in hand showing you how to bake, but letting you do it all... you may even surprise yourself. In fact, I promise you that you will, I've had various people tell me that they "can't bake", I've popped over with my baking kit and they have made cakes to rival my own. It's a fantastic feeling knowing I can help you to do just that. 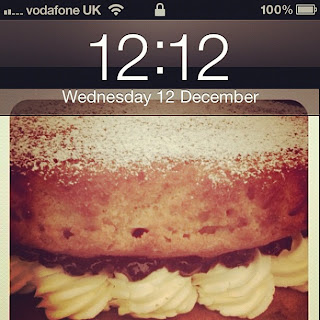 My very first baking student was an equally special student, as Mark was in fact not only a friend to The Secluded Tea Party, but also part of the reason that my Afternoon Tea & Cake Baking School has finally taken flight.
Following this years' Great British Bake Off Final and my cake-based endeavors to match it, Mark had mentioned that it had gotten him thinking about baking. 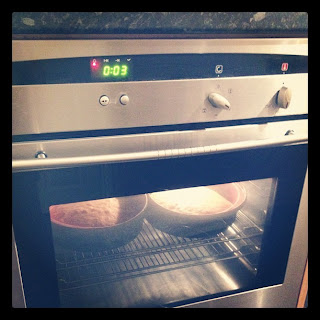 He mentioned to me that he wanted to learn how to bake, get to know a little bit about why there are certain techniques and reasons behind your actions whilst baking a cake and in fact make his very own cake for the first time in his life.
Not only for himself, but he wanted to learn to bake basic treats to show the Cambourne Scout group around the camp fire too. This sounded right up my street, so I got plotting! 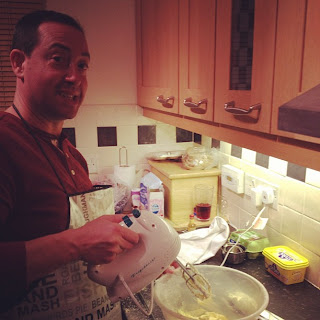 This all sounded like a challenge that I was willing to accept, so accept I did.

I hopped on over to Marks house and spent a couple of hours with him assisting... well, I say assisting... I stood back sipping on a nice strong coffee whilst I pointed at things and pushed equipment in Marks general direction whilst shouting orders at him as he followed my delicious cake recipe. 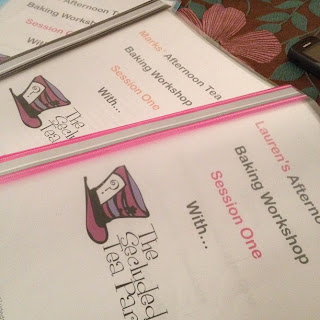 Hehe... I didn’t really shout. I guided him through the recipe, demonstrated how I make my cakes with everything from a simple way to make up the cake batter, which bake ware I use for the best sponge and how to make a "minimal-mess" buttercream (Icing Sugar shower not included, hurrah!) 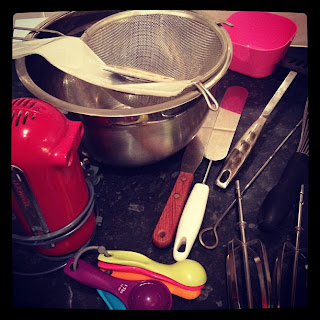 Mark made notes as we went, working out which temperature and time was needed for his Ferrero Rocher Cake to bake perfectly and evenly and we discussed the crazy layout of Tesco in Huntingdon as well as other important issues as we went, alternating at the sink to wash up as the evening went on - It was great teamwork. 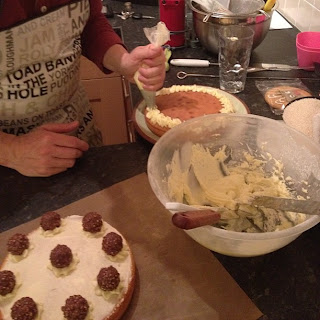 His lovely wife, Debbie had no idea that he was actually baking her an early birthday cake with my guidance and he had bought candles to finish it off perfectly. I even offered my beautiful (ahem) singing voice to help him present it to her once we had finished with a beautiful rendition of “Happy Birthday” before fending their 2 dogs off the cake. It was so much fun. 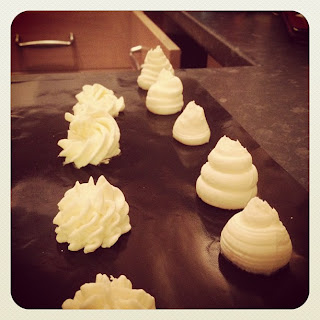 What is even better is that Mark had even managed to get to grips with the Buttercream, going through the best ways to spread it, but he challenged himself by copying my "trademark" swirls instead. And he was a natural, as I showed him how to make various different shaped swirls with the nozzles I had with me, he went for the star shaped swirl and practiced on a baking sheet before hitting the cake with his equally awesome swirls - I was a very proud teacher indeed!

The finished cake looked like the show stopper it was intended to be and even I was proud that I managed to coach him over an hour or so and produced this masterpiece without even having to touch it. It was truly his work entirely. He even had his mind racing as to what ideas he could come up with next to adapt it to similar flavours, but with various twists.... He was on a roll! 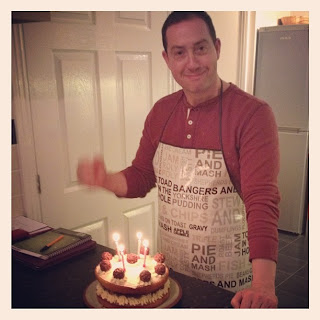 "You will do this with everybody else no problems Miss Sue Flay, it was more like baking with a friend which meant I didn't feel any type of pressure - Santa has had some additions to my Christmas list! 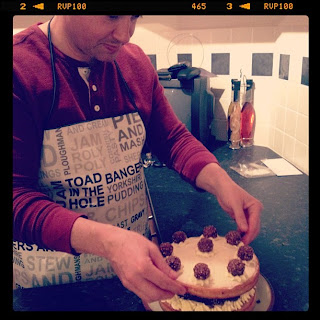 Those who are next, you will enjoy and be amazed with the results, the easy reading pack you get is great and easy to follow, Miss Sue Flay is just there to help with questions and little tips which make it a little easier (and drink coffee and chat ; ) " 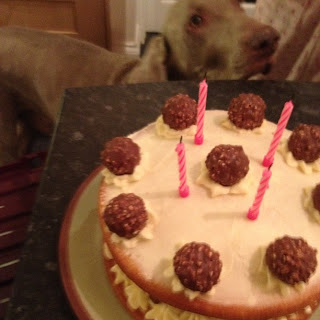 Simply email Miss Sue Flay at cake@secludedteaparty.com
for more information or to book/buy
gift vouchers now.
I look forward to baking with you very soon!

Posted by The Secluded Tea Party at 08:43